Even if malaria has been eliminated in Italy almost fifty years ago, we should be aware of the persistence of this problem in many other countries. Malaria still remains one of the leading causes of death in children under 5 years old.

Considering such purpose, on the 9th and 10th of June, a ceremony for the opening of the new laboratory of Polo GGB – partner institution of Target Malaria – was held in Terni a small city in the centre of Italy.

During the event, visitors were given the opportunity to visit the entire facility and interactive activities were set up to allow the public to better understand the importance of Target Malaria, the research, technologies involved and its goals. Our staff and researchers were of great support and were present to answer any questions visitors might have on the dynamics of the disease, laboratories and studies. The interest shown by students and visitors rewarded researchers ad organizers for all the efforts they made in the past few months.

The new contained laboratory in Terni houses four climatic rooms which are equipped with the latest technologies which makes it possible to mimic more the natural environment of the Anopheles gambiae mosquito. This allows the most precise temperature and humidity control for large cages studies on mosquito populations. In addition, light conditions mimicking the daily variation including dawn and sunset can be manipulated to simulate a near-natural tropical climate in which the complete biological cycle of mosquitoes would naturally occur. The climatic rooms have adequate dimensions to accommodate thousands of mosquitoes allowing the safe study of large populations under highly contained conditions. This advanced contained facility represents the ideal environment in which we can study gene drive technology.

One of the main objectives of the open days was introducing the new laboratory to the city, its institutions and to the whole scientific community. The initiative was promoted by Target Malaria, Polo GGB and Terni City Council, and was attended by many students and scientists involved in this field of research, among them, Professor Crisanti – Principal Investigator for the Crisanti Laboratory at Imperial College London and Professor Burt – Principal Investigator for Target Malaria. 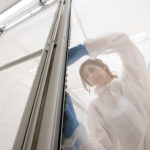