At Target Malaria, we aim to fight malaria by controlling the malaria-mosquito. The technologies we are working to develop aim to reduce transmission of the disease by reducing the population of Anopheles gambiae, one of the main vectors of malaria in Sub-Saharan Africa. With research in the lab still ongoing, our approach is intentionally cautious and iterative. A central part of our work is investigating the potential impacts that a release of gene drive mosquitoes could have on the environment.

One of the issues requiring further investigation is that of potential “ecological niche replacement”.  If the population of Anopheles gambiae were to be reduced, could other disease vectors potentially occupy its position in the ecosystem? Although “niche replacement” in itself would not necessarily be a harm, it would be if it were to result in increased transmission of malaria or another disease.

As some existing vector control methods, such as insecticides, also work by reducing the number of malaria mosquitoes, one way to evaluate whether gene drive approaches for vector control could cause niche replacement is to examine what the consequences have been from the use of these pre-existing measures employed in the field for decades. In our newly published paper, we asked the question “Has the historical use of insecticides to control malaria mosquitoes, for example via impregnated bed nets or indoor spraying, been associated with any increases in the densities of populations of non-targeted vector species?” 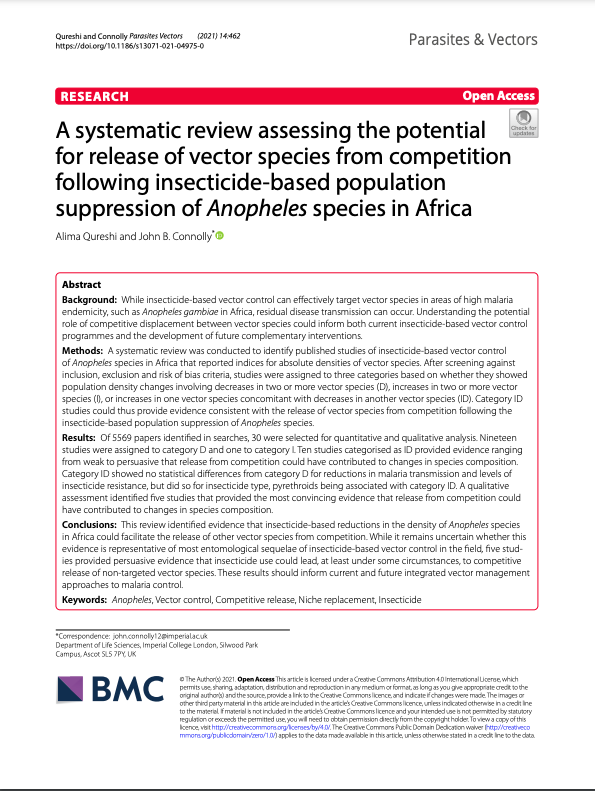 “Has the historical use of insecticides to control malaria mosquitoes  been associated with any increases in the densities of populations of non-targeted vector species?”

To address this question, we carried out a systematic literature review to identify published studies that measured the population densities of vector species before and after insecticide-based vector control interventions in Africa. For maximal transparency, our analysis was conducted according to international PRISMA guidelines and our protocol was published on the PROSERO database for international registration of systematic studies more than a year ago, before any formal searches of the literature had even begun.

Our research identified five studies within Category ID providing evidence that the use of insecticide for vector control could lead to a replacement of the targeted vector species with other sibling species that share larval aquatic habitats.

Consistent with these observations, our review also found no convincing evidence that reducing the population of An. gambiae s.l. through use of insecticides could lead to increases in the populations of species outside of the Anopheles genus, such as Aedes aegypti, a major vector species responsible for the transmission of dengue and yellow fever.

So what does this mean for considerations on the potential use of gene drive in the field?  As is the case for insecticides, novel forms of vector control, such as gene drive approaches, might also result in increases in the populations of non-targeted vectors that share larval aquatic habitats or predators with the malaria mosquito Anopheles gambiae. Similarly to insecticides, these interventions could therefore effectively reduce the incidence of malaria, and thus overall disease burden, even against the background of potential niche replacements.

We hope that going forward these findings will help inform the implementation of both existing and future vector management approaches to control malaria.

For more information on the role of ecological niches, please read our factsheet: Potential human & environmental impacts of gene drive mosquito releases on other mosquito species 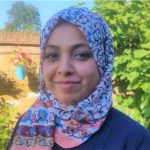