On June 30th, the U.S. President’s Malaria Initiative (PMI) is celebrating its 15th Anniversary. PMI, one of the most prominent organisations fighting malaria worldwide, was created by the former-US President George W. Bush, back in 2005. Since then, the initiative has been working to give children a healthy childhood and break the cycle of disease and poverty in places where malaria is endemic.

During the last 15 years, PMI played a vital role in providing financial and technical resources. In 2019 alone, they spent USD$ 729 million in initiatives across 24 countries in Africa and three different programmes on the Greater Mekong Subregion in South East Asia. Altogether, these regions represent 90% of the global malaria burden.

Together with its partners, PMI has helped save over seven million lives and prevent more than a billion malaria cases. Due to the progress against malaria, a child has a better chance of survival today than at any other time in history. PMI has played a vital role in this process: 22 partner countries in sub-Saharan Africa registered reductions from 10% to 67% in all-mortality rates in children under five years.

PMI’s focus on capacity building and infrastructure has helped improve health care systems and generated a high return on investment. The initiative pioneered new approaches: in partnership with the Global Fund, PMI helped to make artemisinin combination therapy (ACTs) a first-line treatment; it also introduced rapid diagnostic testing (RDTs) at both the facility and community level, shifting away from presumptive treatment.

Since 2005, the organisation has distributed:

It is undeniable that PMI has been making a huge difference in the global fight against the disease. Its role is even more relevant in today’s circumstances with the current pandemic adding stress over already fragile health care systems.

Congratulations to PMI on 15 years of fighting malaria and saving lives! 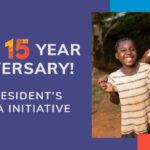