What role do malaria mosquitoes play in their ecosystem?

Malaria mosquitoes are the deadliest animals on earth. Developing a better understanding of the ecological networks that they inhabit is a critical part of our research investigating genetic technologies as a tool to help end malaria.

Our team of entomologists and ecologists at the University of Ghana are focused on uncovering more on this topic. As it stands, surprisingly little is known about of the ecological role the Anopheles mosquito that is responsible for most malaria transmission in Africa.

The research, which is happening on the ground at the University of Ghana, is studying the ecological relationship of Anopheles gambiae with other species in the community including its larval competitors, adult predators (such as bats, birds, dragonflies, etc), and the plant species it may help pollinate. So far, our studies indicate that Anopheles gambiae are not important pollinators. This data collection will enable us to understand the role of these mosquito species in the ecosystem and accurately model how current interactions would change if their numbers were reduced or disturbed. Some aspects of Anopheles gambiae ecology are well studied but inter-species interactions are less well known, the research in Ghana will add a more detailed picture of their ecological interactions.

A large part of our research is about increasing our knowledge of the role and interactions that Anopheles gambiae has with others in its ecological community. This requires gathering and analysing information from Anopheles gambiae itself, as well as from other animal species and plants it interacts with. To do so, we collect insects, stomach contents and faecal samples from other animals in selected sites, and use DNA analysis to build a careful picture of the environment in which the mosquito larvae grow, and of the species with which the it interacts. These techniques allow us to consider exactly which predators feed on An. gambiae, and what they might shift their feeding interactions to if fewer An. gambiae were available.

So far, we know that Anopheles gambiae is an important species because of its role as a vector of malaria, not as a key component of ecosystem food webs or pollinator networks. Adult Anopheles gambiae are relatively low-value, low-volume and disaggregated resource and there is a lack of evidence for any tightly-linked predators. No predators are recorded as being closely associated or dependent on larvae of these mosquitoes.

The high seasonality of Anopheles gambiae throughout most of its range and the ephemeral nature of many of its larval habitats also limits predation to generalist species that may take it as prey when the opportunity occurs.
The teams continue to work closely with residents in two villages (Abutia Amegame and Mafi Agorve) in the Volta Region of Ghana over a year period to collect samples. Before collections began, all methods and target sample numbers were cleared by Ethics Committees at both the University of Ghana and the University of Oxford ensuring there is no lasting impact on the plants and animals in the study communities.

This is important to Target Malaria as the project seeks to understand the potential impacts of reducing the population of malaria mosquitoes on the environment. The potential role of malaria mosquitoes in their ecosystems is a common topic shared by stakeholders, from communities to regulators, and the project wants to help them make an informed decision by sharing this research. 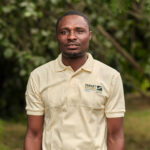