The long journey of mosquitoes – Insight from London

It is a mild and cloudy Tuesday morning in London. The streets are busy with crowds of families and tourists queueing to enter the museums in South Kensington. Little of this is visible from a high-containment laboratory kept at 28 degrees Celsius and high humidity to mimic tropical environmental conditions. In a basement laboratory at Imperial College London a young scientist is looking at some mosquito larvae through the microscope. After having screened thousands of larvae, she finally finds what she was looking for. A tiny mosquito larva with bright, red, fluorescent eyes. She carefully collects it, and puts the precious larva in a separate tray filled with salty water. When this fluorescent mosquito will emerge as adult, it will be crossed to a wild-type mosquito and the progeny will be analysed for its ability to alter the laws of inheritance. This is an additional step in our long journey towards the generation of modified mosquito strains that could reduce the transmission of malaria. The glowing eyes are the result of a marker (a fluorescent protein, like the ones of jellyfish) we use to tag the modifications that we introduce into the mosquito genome. The fluorescence helps us to track and to distinguish the modified mosquitoes from the unmodified.

We are generating mosquitoes carrying a gene drive that targets the ability of females to produce eggs. A gene drive is a genetic modification that can bias its own inheritance when transmitted to the offspring (up to 99% of the times, compared to 50% of a non-gene drive trait). This means that while the gene drive spreads within a target population thanks to its biased inheritance, it spreads also the infertility trait associated with it, with the aim of reducing the number of mosquitoes in the population, and therefore the transmission of malaria.

In the laboratory, we are also researching ways to improve the efficacy of gene drives. The core component of the type of gene drives we are building are very specific DNA-cutting enzymes. The control of when and where the DNA-cutting enzymes are expressed and activated in the mosquito is central to the action of the gene drive. We are testing new of those genetic controllers (promoters) with the aim to decrease the impact of the genetic modifications on gene drive efficacy. We are working hard to identify the correct combination of tissue specificity and activity of our gene drives such as to minimize the impact on the mosquito fitness (that could delay – or prevent – the spread within a population).

The heart of our gene drives is a class of nuclease – a DNA-cutting enzyme – called CRISPR. CRISPR proteins are highly specific, which means they scan the genome to find a unique DNA sequence and when they find it, they cut it, like a precise genetic scissor. The advantage of CRISPR is that it is easier to program it to recognise a DNA sequence, and specifically cleave it. The more precise CRISPR is at finding and cleaving the target sequence only, the higher its specificity. We are now assessing the specificity of our CRISPR-based gene drives to understand and see if they cleave at off-target sites, such as at regions in the genome that they are not designed to cut. Such knowledge is paramount to generate safe and effective gene drives.

The journey for the mosquitoes generated in London is long before it could reach endemic malaria countries and contribute to reduce the transmission of this deadly disease. It is exciting to see how Target Malaria is growing and paving the way to make this journey possible. 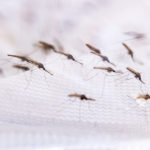