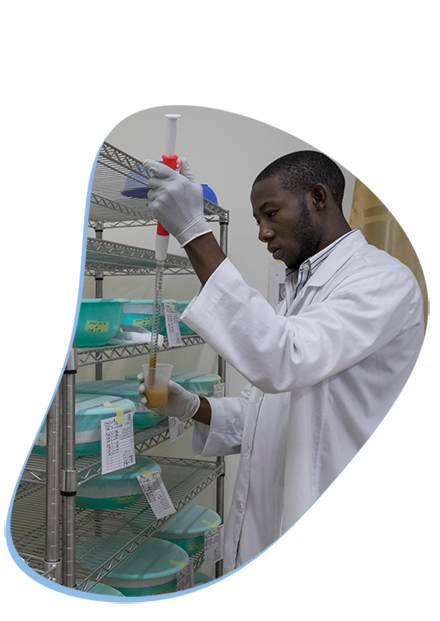 Malaria is predominantly a rural disease, which has remained most entrenched in African countries with populations spread over large areas and often with less well-developed transport and public health infrastructures. The complexity and cost of carrying out repeat interventions (such as spraying and bednet distributions), combined with issues of growing resistance to insecticide and anti-malarial drugs, are threatening to reverse progress on malaria elimination.

Our goal is a new vector control tool for malaria. To achieve this goal, we are developing a gene drive mosquito strain, in which the modification to the mosquito will be ‘self-sustaining’.

Gene drive is a genetic phenomenon that occurs in nature that biases inheritance. It causes a selected trait to spread rapidly through a species via sexual reproduction over several generations. Gene drive works by increasing the likelihood that a modified gene will be inherited by its offspring. Normally, genes have a 50/50 chance of being inherited, but gene drive systems could increase that chance to upwards of 99 percent. This means that over the course of several generations a selected trait could become increasingly common within a specific species.

The gene drive mosquito colonies are held in our laboratories in the United Kingdom and in Italy. There are currently no colonies in Africa.

How we create a Gene Drive mechanism

We are currently investigating several options, the two most promising are:

Both approaches would lead to a reduction in the mosquito populations that are the main malaria vectors. We are making good progress, but these approaches are still in the discovery stages in our laboratories in the UK and Italy.

Although we are developing the approaches separately, it may also be possible to combine the two approaches for use in the fight against malaria. The successes of the project thus far on self-sustaining genetically modified mosquitoes have been published in peer reviewed scientific journals. (Read more in our Library of publications.)

As we are pioneering the developmental pathway for self-sustaining gene drive mosquitoes there are many consultation and evaluation steps that we need to take and these may also change over time.

The pathway to develop our gene drive mosquitoes is informed by clear guidelines on safe and ethical research from expert organisations such as the World Health Organisation (WHO), with the objective of ensuring that rigorous evaluation of genetically modified mosquito strains takes place before they are proposed for use. We progress our strains gradually from research under physical and biological containment in laboratories and insectaries to field evaluation. Moving from one step to the next is carefully considered and subject to regulatory oversight by national authorities.