Target Malaria would like to take the opportunity of World Malaria Day to bring focus on an underlying fact in the worldwide struggle against malaria: insecticide and drug resistance and the need for new vector control tools.

Thanks to the mobilization of resources and political will, malaria control and elimination efforts over the past 17 years have resulted in nearly 7 million lives saved, hundreds of millions of infections averted and over US$2 trillion added to the economies of endemic countries. However, malaria remains a deadly threat, in 2015 alone malaria caused the death of 429 000 people, of whom 70% were children under five years old.

The advancements made have mainly been the result of scaling-up the combined use of different vector control tools such as insecticide treated nets, indoor and outdoor residual spraying, and others interventions especially in sub-Saharan Africa.

We cannot stop this global effort, when today alone more than 700 people, most of them young children under 5, will die from malaria – a preventable and treatable disease. Beyond loss of lives, livelihoods are affected as the disease leads to lost work days and causes children to miss school, holding back economic growth of endemic countries.

Unfortunately, we have seen that the gain against the disease is fragile as new signs of resistance have emerged. Signs of resistance of the Anopheles mosquito to insecticides, as well as the Plasmodium parasites resistance to antimalarial drugs, have been identified.

If left unaddressed, resistance could become a serious threat to malaria resurgence and would represent a major setback to all the efforts undertaken till today. This is the reason why Target Malaria would like to stress the global community and governments that it is more pressing than ever to keep promoting and endorsing research for new vector control tools.

As we all know, research is a complex process and it might take several years for new vector control tools to emerge on the market. For that reason, we should keep using already existing working methods while encouraging the discovery of others.

It is undeniable that we still have a long way to go to reach malaria eradication but at Target Malaria we believe the investment in research and development in new vector control tools is indisputable if we want to one day live in a malaria free world. This World Malaria Day, let’s keep the conversation rolling on ending malaria for good – #endmalaria 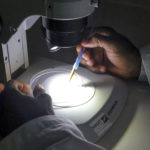