March 8 is International Women’s Day, a date to celebrate women’s achievements in the social, economic, cultural, and political spheres. This year, the United Nations chose to recognise the vital role women have played in the fight against coronavirus.

In today’s COVID-19 pandemic, women stand at the frontline of the current health crisis, from health care professionals to national leaders. Women have also been crucial in the fight against malaria. Nurses, doctors and medical professionals help malaria patients but it’s also women who are the primary caretakers of malaria victims in households, increasing their responsibilities and adding yet another burden to their livelihoods. Women have also been responsible for fantastic scientific breakthroughs over the years.

Have you heard about Tu Youyou? No? That is not surprising. Unfortunately, we are not used to hearing about great female scientists. Tu Youyou saved millions of lives! She is a Chinese pharmaceutical chemist and malariologist who discovered artemisinin, used to treat malaria.

She did all that without a doctorate or a medical degree, turning to Chinese traditional medical texts to find the disease’s cure. Once able to isolate the artemisinin in 1971, she was confident enough to personally volunteer to be the first human subject. Her contribution to science was recognised in 2015 when she received the Nobel Prize in Physiology or Medicine – the first time a Chinese woman received the award.

Youyou Tu receives her Nobel Prize medal and diploma in 2015:

Last year, Emmanuelle Charpentier and Jennifer Doudna were jointly awarded the Nobel Prize in Chemistry for discovering the CRISPR/Cas9, one of gene technology’s sharpest tools. The “genetic scissors” can modify the DNA of animals, plants and microorganisms with unprecedented precision. Their discovery can potentially help to address global health challenges, such as cancer and vector-borne diseases. Read more about their work at Nature.

At Target Malaria, we are researching several approaches to reduce the number of Anopheles gambiae  mosquitoes that transmit malaria, including CRISPR-based gene drive technologies.

Gene drive is a genetic phenomenon that occurs in nature and enables a selected trait to spread rapidly through a species via sexual reproduction over several generations. Gene drive increases the likelihood that offspring will inherit the modified gene.

Our research consists in using CRISPR/Cas9 to select which genes we want to pass over (or drive) to future generations. Once proven successful, and safe for human health and the environment, the genetic modification we are developing is aimed at reducing the number of Anopheles gambiae  mosquitoes because they transmit malaria when biting. Our aim is for gene drive technology to be complementary to current approaches in the fight against malaria. Throughout history, women have been playing a pivotal role in the fight against malaria and many other diseases. Female scientists, health professionals, and mothers, thank you for your restless dedication. Happy Women’s Day! 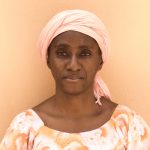